We would like to help you with the organisation of your wedding. Our aim is to make your wedding and the wedding reception one of the most beautiful events of your life.

We can help you with the ceremony and the wedding reception as well. You can trust us in case of both a traditional wedding and a modern event.

More than 30 years of experience and hundreds of successful wedding prove us!

and other things that you imagine and want, we will realize!

We serve the soup and the stew, the roasts are offered from the buffet table.

After midnight from buffet table:
- Taster of cheese specialties and season fruits
+ leftover roasts from the dinner

After midnight from buffet table:
- Roast chicken or breaded chicken with salad (e.g. potato salad with mayonnaise)
+ leftover roasts from the dinne 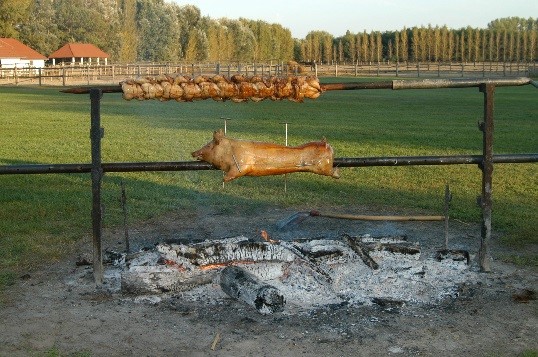 A show kitchen awaits the arriving guests in the yard of the csárda.

Our chefs cook the goulash or the stew in a kettle in front of the guests. They grill the meat continually on glowing embers and chickens and/ or a pig are turned on a spit.

The prepared meals get to the festive table.

Bride abduction with the help of a coach

Our horsemen whip on the stud, after that in an unguarded moment the bride is kidnapped. The bridegroom follows the robbers on horseback (or he walks together with the wedding guests) to the grandstand, here meets the young couple. After that field event, the bridegroom ransoms the kidnapped bride. The task of the bridegroom is to knock down a bottle with a whip.